Regardless of the crop you are harvesting concaves always have two jobs to do. Thresh and separate. Thresh, or free the seeds, and then separate those seeds from everything else that went into the combine along with the seed.

Of all the different crops that are grown in North America, as well as being the largest crop, corn is also one of the easiest to thresh.

With corn you’ve got a 3″ diameter cob covered with kernels as big as the end of your thumb. With the kernels sitting out in the open they are easy to thresh and, because there’s no straw or chaff to deal with, the concave doesn’t have any problems separating the empty cob from the kernels. The kernels fall through the openings in the concave and the big empty cob travels on through to the walkers.

In most conditions corn is so easy to thresh that the entire concave is not all used. With the 13 bar concave that came in most Deere combines from 1973 to 1984, only the middle seven were used for threshing. The front three and back three fell away from the circle. We feel this was intentional, in order to let the big corn cobs through, but it sure makes it hard to do a decent job in anything else but corn.

While the front and back of the concaves, for the new John Deere conventional combines, no longer fall away from the cylinder they are manufactured to a 27 1/2″ circle. In almost every crop, except corn, a 27 1/2″ concave is simply too big for a 26″ diameter cylinder. Corn is about the only crop that can be threshed with that kind of a gap. These concaves may get you through in corn but you’ll begin to have threshing and separating problems as soon as you pull into almost every other crop. With most other crops the seeds are a lot smaller and concave tolerances are more critical.

Remember it is more difficult for the concave to do its job when the seeds are locked inside a head and there’s straw and chaff. 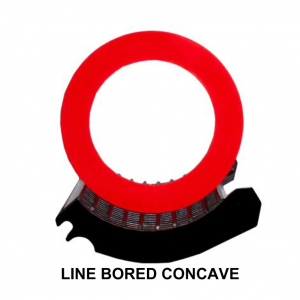 HARVEST Concaves are also built heavier and stronger. They start out as a precision concave and because they are stronger they keep their shape and remain a precision part. This is especially important when harvesting crops with straw or smaller seeds.

On HARVEST Concaves the threshing area, or the first third of the concave, is covered with Filler Plates.

cylinder bars striking the heads and not by gentle rubbing.To thresh cereal grains properly the concave also needs more bar above the Filler Plates. The wires have to be placed deep enough to allow a minimum of 3/8″ of bar above the Filler Plates to form a deep enough pocket to hold the heads long enough for the cylinder bars to rub the seeds out of the head.

The Filler Plates allow you to fine tune your concave to obtain maximum threshing and separating performance. It only takes about five minutes to add or remove a Filler Plate. The concave does not have to be removed.

Now we’re not suggesting that if you only grow corn you can go into a harvest season with a bent or worn out concave. That’s just not good practice.

Because HARVEST Concaves are manufactured and precision bored to the highest standards you know they will give you the best performance regardless of the kind of crop you are harvesting.

In all crops, except sunflowers and wet corn, set the concave to form a wedge, open at the front and closed at the back. Set the front concave-to-cylinder clearance according to your crop. With most crops that would be 3/4″. A bumper crop needs a larger opening, about 1″, and a light crop needs a smaller opening, about 1/2″ The rear concave-to-cylinder clearance should be set at almost zero.

At the front of the wedge the Filler Plates in the concave hold the heads in place so they can be properly threshed. As the wedge closes the cylinder bars push the straw up the concave towards the back beater. At the same time they also accelerate the seeds through the openings in the back two-thirds of the concave.

When setting your concave for sunflowers the wedge is not as critical. Set the front and back of the concave slightly less than the thickness of the pad, tight enough to take the seeds out but not so tight that the pods break up.

Because HARVEST Concaves are precision bored to a perfect circle it is important that your cylinder bars also describe a perfect circle. One high bar is enough to significantly increase walker loss, white caps and cracked kernels. Every new HARVEST Concave comes with a shim kit to true your cylinder bars. We feel that more problems can be prevented in the cylinder and concave than anywhere else in the combine.

You will be surprised to learn that the cylinder bars of all combines, will vary as much as 1/8″ of an inch in thickness. Experience in the field has proven that the maximum out of round a cylinder can be for grain crops is .0030″ between highest and lowest bar. If you have a grain that is particularly hard to thresh, or if you harvest seed crops such as alfalfa, then it should be no more than .0020″.

Consider what happens in grain crops if you have one high bar in your cylinder. Every time that cylinder bar comes around, it wipes the concave clean with the following result:

To compensate for the unthreshed heads, the only thing the operator can do is turn the cylinder faster. Now three things happen:

Almost all cracked kernels or damaged seed comes from running the cylinder too fast.