The shoe has the potential of being one of the greatest loss areas in all combines, particularly in small seed crops where the majority of the material comes over the sieves. Sieves, along with shoe shake, are designed to walk the material out the back of the combine, scalping the seeds out as the material shakes across the sieve. The airflow directed to the sieve by the fan is intended to blow hulls, chaff and short straw out of the combine. As you know, this system works quite well most of the time but can be a nightmare to set properly in some conditions. Whatever adjustment you make can seriously affect other areas of the shoe. For example, if you use too much air, you will either blow grain out the back of the combine or blow clean grain in the return.

We have found that in combining certain crops in certain conditions we have had to make modifications to the shoe. In some machines it may be to simply add a curtain to seal off a gap to utilize the airflow the fan is creating. On other models we have done extensive fan and throat modifications. We have done modifications to every model of combine that we have worked with to date.

If your combine is having a shoe-related problem we have designed and manufactured an Air Foil Chaffer that has been on the market for the past 27 years. The design of this chaffer allows us to claim that we can achieve cleaner samples, increased capacity and less loss over the sieves. This design allows us to use more airflow without blowing grain out the back. Anytime you can use more air you will get cleaner samples as well as cleaning your grain more efficiently.

WHY THE HARVEST AIR FOIL CHAFFER WORKS SO WELL: 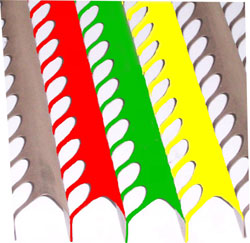 On all crops, except corn and beans, at least half of the material being dumped onto the shoe is a mixture of short straw, hulls and chaff. Trapped within this mixture, and making up the other half of it, is the grain you want to save.The HARVEST Air Foil Chaffer provides a uniform distribution of air across the entire width of the combine. It also redirects the air almost straight up. This uniform blast of air prevents the matting which traps your grain. Although the air has been redirected almost straight up, it actually blows 10 degrees off of vertical towards the rear of the combine. The cushion of air pressure keeps the lighter material suspended while it is floated out the back.
This design also ensures sufficient time to allow the heavier material, your grain, to fall through the openings in the HARVEST Air Foil Chaffer for almost 100% seed recovery in all crops.

EFFECTIVELY SEPARATING YOUR GRAIN FROM THE CHAFF:

The most important difference between the factory open louvered sieve and the HARVEST Air Foil Chaffer is uniformity of air pressure. As we have stated before, one of the largest crops is corn. And when compared to the majority of other crops, corn is a very clean crop to thresh. With corn there is no straw, and very little chaff or dust. In corn all the shoe area of the combine has to do is separate the kernels from a few big cobs and some leaves.

The sieves on factory equipped combines have open louvers with fingers. When harvesting high moisture corn the fingers help break up the mat of kernels that tend to stick together. The adjustable finger sieve is designed with many rows of continuous openings. This design works fine in corn but problems begin with crops that have chaff and straw.

In all crops, except corn and beans, at least half of the material that drops onto the shoe is short straw and chaff. The other half is grain. To effectively recover your grain from heavy chaff loads HARVEST Services developed the Air Foil chaffer.

To get an idea of how uneven the air pressure really is look at the wear pattern on the metal work above the front of the top chaffer. If it isn’t worn evenly all the way across you’ve got air distribution problems and inefficient top chaffer performance.

Along with the poor design of the open-louvered sieve another cause of uneven air distribution is the fan not sitting square in the housing, resulting in uneven cut-off clearance.

The HARVEST Air Foil Chaffer is designed to deliver an even air pressure across its entire width. It also has non-adjustable louvers which direct the airflow almost straight up. This uniform air pressure is exactly what is needed to lift the heavy blanket of chaff and allow your grain to fall through the screen while the chaff and broken straw are floated out the back of the combine.

Please don’t confuse the HARVEST Air Foil Chaffer with the Peterson adjustable sieve. From the top the shape of the holes does look similar, but there is no comparison. The holes in the Peterson sieve are 35% smaller and because it doesn’t have bottom louvers the air is not directed up and the air pressure is not uniform. As a result you have no air cushion effect, nowhere near the capacity you need and, in a short time, it will just wear out due to its thin wire design.

With the HARVEST Air Foil Chaffer you’ll notice the difference in increased capacity, reduced shoe loss and less trash in your grain. It works in all crops, but you’ll notice a big improvement in sunflowers, wheat, barley and all of the small seed crops including flax, canola and grass seed.

When harvesting milo, sunflowers or other crops where spearing is a problem a Ripple Tin can be used to cover the front of the top chaffer and eliminate spearing. The Ripple Tin prevents spearing by laying the stems and stalks flat. If you don’t correct a spearing problem those stems and stalks eventually work their way down to the bottom sieve and cause premature wear and failure. HARVEST Ripple Tins are approximately 13″ long but never cover any more of the Air Foil Chaffer than required.

In addition to preventing spearing the Ripple tins will also direct more air to the portion of the chaffer where it is needed the most.